If You Weren’t So Fat You Wouldn’t Have Diabetes

Having diabetes often makes a visit to the doctor a dreaded experience, as there is invariably bad news of one kind or another.  And sometimes the way the doctor talks to you can leave you feeling like you’re at fault.  Or maybe you have a fantastic healthcare team, but have experienced blame and judgement from someone else in your life – friend, loved one, or a complete stranger.  Think about a particularly bad instance, how that person talked to you, the words they used and the conversation you had.  Now, the game part.  Let’s turn this around.  If you could turn that person into a puppet, what would you have them say that would leave you feeling empowered and good about yourself?   Let’s help teach people how to support us, rather than blame us!  (Thank you, Brian, for inspiring this topic.)

Gosh, as if having type 2 diabetes is not hard enough when you have to deal with all of the stereotypes in society, when your own health care team subjects you to it, well, that can really hurt.  My blog post today is about a selection of my experience on this subject and how I’ve been on the receiving end of discussions about my weight which have left me with really bad emotional feelings and feelings of blame about how I got diabetes and my successes and failures managing my condition.

I have posted before about how there are misunderstandings concerning type 2 and about how the words we use such as “reversing diabetes” can be hurtful.  But today I’m going to talk about my former endo who I refer to as “He Who Shall Not Be Named.”  I chose that endo for what I believed were good reasons at the time, he was a prominent a respected endo and even served on the task force that developed the then current AACE guidelines. But what I didn’t understand that he had a terrible bedside manner and as a result his patients were often unhappy and often did not good outcomes.

First, he spoke to me in a constant condescending manner telling me that my (apparently) poor lifestyle had led to my weight gain and that had caused my diabetes. He was very clear, I caused my diabetes, he had a low opinion of me because I caused my diabetes and in his tier of patients as such he had little respect for me.  At this point I was already on two diabetes medications and had been using a very low carb diet for about 5 years.  These visits left me feeling a great deal of blame about my diabetes.  I think everyone with diabetes (of any type) struggles with the question of “how did I get diabetes?” as well as the more difficult personal question “could I have done anything to avoid my diabetes?”  Having a doctor repeat a message that clearly tells you that you “gave yourself diabetes” is very hurtful.  And it can be really hard leaving a doctor’s appointment with really negative emotions surrounding your diabetes and then go back to the 24/7/365 grind of managing your diabetes.

These second thing that occurred with this doctor is he reinforced that not only did I get diabetes, but despite having moved to triple medications, if I just lost weight I could get better.  OMG, I could just not be so fat and my diabetes would get better.  So I was counseled that my real problem was that I needed to lose weight because I was fat.  It didn’t matter that it wasn’t really true.  I was certainly heavier than I had been as a teenager, but not particularly overweight for a 50 year old man.  So after a few appointments with the continued message that I was overeating, not exercising enough I agreed to lose some weight.  I worked really hard those ensuing three months.  I adopted a calorie restricted low carb diet and going in to my appointment I thought it would be a very positive session, I would see improvement and encouraging words.  I had lost 10 lbs representing 5% of my bodyweight.  What I didn’t know was that my blood sugar control was unchanged.  That endo refused to let you see you lab results until he had a chance to “interpret them” (gosh after years of diabetes I know what an A1c means).  I sat there stunned to hear him say that my weight loss had done nothing for my diabetes control.  In fact my A1c was up 0.1%!  I remember his words.  We talked about the changes I had made, in particular that I was doing a low carb calorie restricted diet.  He had the nerve to tell me “obviously you are just not doing it right.”  In hindsight I could see through how absolutely ridiculous and hurtful that was.

The thing that really made those appointments so very difficult for me and left me with such deep feelings of blame was the way that doctor talked to me.  He chose words and had a conversation that made it very clear.  My diabetes was my fault, my poor lifestyle choices had a key role in my getting diabetes and further I was a continued failure because despite being told repeatedly I just “didn’t do it right.”  That somehow as a patient, I had this magic power, I had the agency to manage my diabetes and I just failed.

Over the years, I’ve learned a lot more about diabetes.  I learned that type 2 diabetes is actually much more related to genetics than obesity.  In fact weight gain, being fat and obese are more likely symptoms of diabetes than a cause.  This is why attempts to intervene and have people lose weight don’t work very well.  And this is why such a message was untrue for me.  I was never very overweight and losing weight never did much for my diabetes.  But having these words said to me and having these hurtful conversations, that had a negative impact on me.  It is hard enough having diabetes, but having diabetes and having to deal with negative emotions such as blame that is double hard.  It is so much better to go through life, feeling good about yourself, feeling empowered and being able to face challenges without these negative feelings.

With diabetes it is very important to understand the difference between the things that are within your grasp to change.  Just like in the Serenity Prayer:

So here is how I wish my endo had talked with me about my diabetes.  First, I wish he had talked to me about my diabetes as a condition that I had, not as something I gave myself.  Diabetes is rampant through my family.  Now in hindsight I don't believe there is anything that I could possibly have done to avoid my diabetes, too bad I didn't know that earlier and felt bad for so many years.  I also wish that he never used the words prevent and reverse, I never was in any position to either reverse or prevent my diabetes.  I wish he had given me encourage words that he could help me be successful and that it was going to be ok.  I would certainly never berate a patient for being fat every appointment when the doctor himself is more overweight.  And telling a patient that they are less than a person because they had a poor lifestyle is morally and ethically wrong.  Everyone should be spoken to with respect no matter what their circumstances.

The second thing I wish my doctor had done was that after losing 10 lbs and not improving my condition I needed encouraging words.  I needed to hear that I was successful.  In the end, none of this lifestyle stuff worked much (well except a low carb diet) and in truth neither did any type 2 medications.  I eventually moved on to insulin.  And moving to insulin is yet again another key point where patients feel a sense of failure and blame (but that is another entire blog post itself).  I needed to be told things that would let me leave the appointment empowered.  I needed to hear that even if my A1c didn’t budge my weight loss was a great achievement.  I needed to hear that “I had done it Right.”  I did after all lose weight, the fact that my A1c didn’t improve didn’t mean that I had not achieved something great.

Ultimately, I left this doctor. These conversations were a part of a broader problem.  He saw himself as the “decider in chief.”  He never listened to patients, he never answered my questions and he apparently saw not real need to worry about patient feelings.  If I could say one thing back to him after all the years and have him understand it would be to tell him:

Part of diabetes treatment is to help your patients feel emotionally healthy with their diabetes, help them feel successful and empowered.  If they leave your office feeling negative emotions like blame they will find it much harder to take care of themselves.  If you leave a patient with terrible emotional feelings when you could have done otherwise then you didn’t exactly follow the Hippocratic Oath of “Do no harm.”
Posted by bsc at 8:13 AM

Donate to Show Your Hand for DHF

bsc
First diagnosed T2 in 2005, I learned about low carb diets from the on-line community (not my Drs) and became dedicated to patient to patient support. This blog is my space to rant on bizarre and uncaring healthcare, the stigma of Type 2 diabetes and just living with a chronic condition. I’m active on TuDiabetes (as “Brian (BSC)”) and also serve as an administrator. 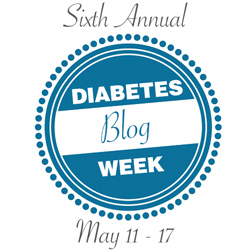